Vita Mundi is currently collaborating in a child feeding project in the neighborhood of Roquetes with the objective of covering the needs of the most disadvantaged families in the area.

The Project is carried out with the Carmelitas Sisters Congregation who distributes essential food to 150 families, every Wednesday from 9 am.to 11 am. Contributing to this purpose,   VITAMUNDI, together with PAYPE and ADECO, organizes food collections in supermarkets once a month.

Between 2014 and 2016, Vita Mundi carried out a social activity in Ciutat Meridiana, one of the neighborhoods with the most feeding needs among the child population.

Since the beginning of 2014, the child feeding project is under the agreement and coordination of Vita Mundi, Paype and Petit Sol.

The neighborhood of Ciudad Meridiana, which is part of the Northern Zone of Nou Barris, is one of the neighborhoods of Barcelona where the crisis has affected the most. According to a study made by the Barcelona City Council, the poverty rate is 51% compared to the average level of the city and with one of the highest levels of unemployment in Barcelona.

Several neighborhood associations (Neighborhood Association of Ciudad Meridiana, Sociocultural Association La Indomable) and also the Misioneras de la Inmaculada Concepción congregation are working together to try to ease the hardships of families in need. These families do not have income of any type or survive with aids (PIRMI) that are totally insufficient to cover the minimum expenses (rent, water, electricity and food). This situation has a direct impact on the child population since many children from these families depend on lunch scholarships, which guarantee a meal a day for the school period, for their meals.

The lack of food for children; during the months of July, August and September, due to school closing and blockage of food banks;  forces to think on specific emergency actions for these months.

Carlos Algara, president of Vita Mundi, was interviewed by Els Matins de TV3 to talk about the food project in Ciutat Meridiana.

DO YOU WISH TO COLLABORATE WITH THIS PROJECT?

What we do in… 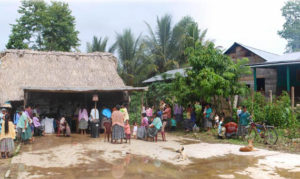 We have been actively collaborating since 2004 with food projects, sponsorships and providing medical assistance.

Since 2005, we have been collaborating with several projects, addressed to women, in the Elmina area (in the south of the country)

Since 2013, we have been collaborating in Ciudad Meridiana and Roquetes, neighborhoods with large food needs among children.

Collaborate with us in our projects

It is a Development aid NGO established in October 2006, with the intention of coordinating specific actions and long-term sustainable projects in different countries with low levels of human, economic and social development.

100% of the contributions allocated in projects.
Expenses are assumed by the founders.
All trips are borne by the expedition members.
No salaries